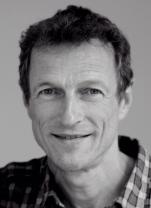 Günther works as a Feldenkrais Practitioner with a private practice in London and assists in Feldenkrais Trainings in Europe and the US.

He has published several articles on the Feldenkrais Method in medical journals and a series of ATMs (Awareness through Movement Lessons) on CD for the German retail market.

He created and presented a series of ATMs for German TV and an Introduction on the Feldenkrais Method for N-TV in Germany.

Günther also works as a guest teacher for the Performing Arts Academies in Munich, Hong-Kong, the Royal Dramaten Stockholm and the Laban Centre, London.